Abstract: Traction motors provide the motive force for the majority of railway vehicles. This paper looks at the fundamentals of the design a nd construction of the main DC a nd AC traction motor types that will usually be encountered in the UK and discusses some of the details that need to be considered.

1 Introduction: Railway systems have a simple goal – to move people and material from A to B. In the Newtonian world in which we live a force must be applied to the object it is desired to move.

As systems and technology have developed so has the use of electric traction motors become more prevalent. The use of electric motors is an obvious solution when the power source for the locomotive or train is itself electricity delivered by either overhead caterary or a third (and sometimes fourth) rail.

The choice is less obvious when the power is supplied by a diesel engine, but mechanical transmissions have limitations in both the tractive effort and total power that they can transfer, especially when size and weight are restricted. So in these severe applications a generator is added allowing the use of traction motors as the final element of the power train.

This paper considers the key elements in the design a nd construction of the common AC and DC traction motors and is an expansion of the paper originally written for the 2008 IET Electric Traction Systems course [7].

2 A Brief History :
Michael Faraday at the Royal Institution demonstrated the first motor, a homopolar motor, in 1821, based in part on earlier work by Humphrey Davy and William Wollaston. This gave rise to a surge of activity with numerous researchers producing every m ore useful machines. As Michael Duffy notes [3] "By the 1840s, powered locomotion had been widely demonstrated with models, boats and wheeled vehicles."

As early as1838 a full sized locomotive built by Robert Davidson [ 1] had been run on standard gauge track and further trials were carried out in 1851 on the Baltimore and Ohio Railway [9]. But these were all battery-powered, in an age when batteries were very inefficient, and fitted with motors that were not really up to the task.

The main challenge was that there was no reliable method of generating sufficient electrical power and then transmitting it so it could be used for traction purposes. But by the 1870's sufficient development had occurred that a combined system of generators, distribution and motors had been assembled that was capable of operating streetcars.

By the 1880's electrically powered, and hence electrically motored, railways had arrived in the UK with examples such as Volk's Electric Railway in Brighton and the Blackpool Tramways, with a more 'heavy duty' application evidenced by partial electrification of the Liverpool Overhead Railway from 1893.

By the 1890's in the UK a number of LVDC (660-750 volt) electric railways with the traction power distributed using a third rail had been developed, in a form that would be wholly recognizable today. Prime examples are the Underground Network and most of the commuter railways in the southeast of England. This era created the DC Traction Motor largely in the form that was to continue until it was almost entirely replaced by AC Motors in the 1990s.

These developments had created a robust and useful system that changed very little until the advent of modern power control electronics. The last camshaft controlled DC-motored stock commissioned on British Rail was the Class 455 in 1985, it is highly likely that a Railway Engineer from 90 years earlier would have understood how it worked and certainly would have be able to fix it.

Thus the DC Motor was the traction motor of choice for at least a century, even though the methods of control progressed from switched resistance to modern power electronics, traction power was supplied from a few hundred volts DC up to 50 kV AC and fully automated train operation had been introduced.

However the age of the AC Traction Motor was fast approaching. Between 1963 and 1964 Brush Traction, based in Loughborough, started trials u sing three-phase asynchronous traction motors [3]. But these proved to be unsatisfactory, largely due to complexity of the control electronics and the project was abandoned.

The next steps in the practical use of AC Motors for traction purposes were taken by Brown-Boveri in Germany. By 1970 they had a prototype diesel-electric locomotive that used AC Traction Motors and the unit was presented at the 1971 Hannover Exhibition as "the first operational locomotive with modern three-phase drive technology in the world" [3]. This signaled the beginning of the end for the DC Traction Motor. By 1974 the unit had been modified to be all-electric with power collection from the German 15 kV, 16.66 Hz overhead line.

However it took another ten years of trials, tests and developments before the asynchronous AC Traction Motor and controls could be considered to be reaching maturity, and more importantly widespread use. In Britain the first fare paying passengers were carried on a train propelled by asynchronous motors on 4 November 1989, the same year that it was announced that all future London suburban stock would use AC Motors [3].

Thus by the 1990's the old king (DC Traction Motors) was dead, but the new king (AC Traction Motors) was growing vigorously. 3 Traction Motor Requirements The obvious starting point is to understand the work that the traction motor needs to undertake. This is determined by the basic equations of motion, along with some limiting factors such as the adhesion (or level of friction) between the wheel and the rail.

Simplistically we need to know how fast the train has to go, and how quickly we want it to get to that speed, i.e. how fast it must accelerate. The acceleration rate will be determined by the Tractive Effort (TE) the motor can provide, while the top speed is governed by the total power available.

In the case of traction calculations this can be restated, where Force = Tractive Effort = TE.

However it is usual to quote TE in kilo-Newtons (kN) as this leads to easily handled numbers, requiring multiplication by a thousand, or more easily just referring to the train weight in tonnes rather than kilograms 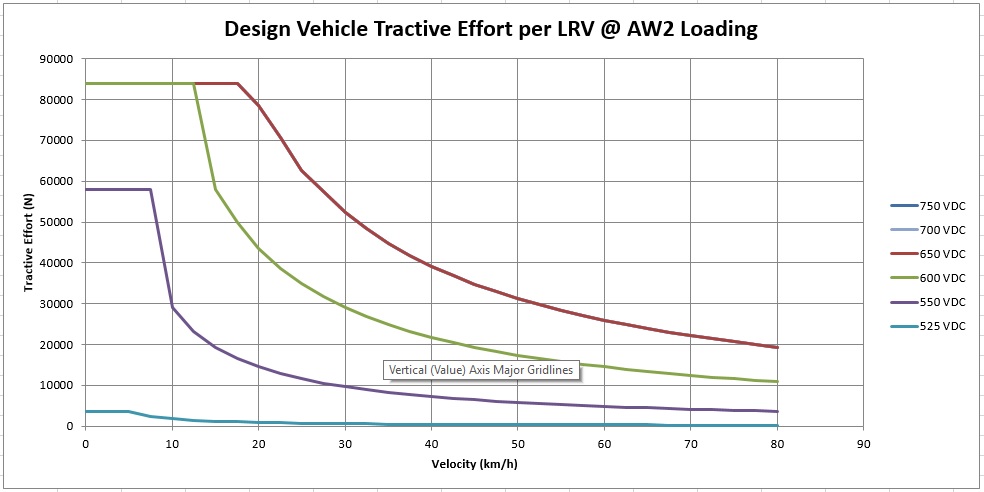